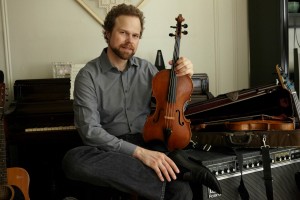 I may be the most eclectic musician you’ve met.  While my primary concert instruments are viola, violin, and six-string electric viola, I’m fluent in five other instruments and counting.  My childhood piano teacher started me on an all-embracing path by allowing me to play Joplin rags and jazzier fare alongside Beethoven sonatas and Chopin preludes.  My public school orchestra directors reinforced my far-ranging musical appetites by encouraging my involvement in the Texas old-time fiddle contest world. They correctly surmised that bluegrass waltzes, Bob Wills swing tunes, and hoedowns would build many of the skills they required for Sibelius, Mozart, and Bartok.

“David Wallace is the artist of the future: a world musician with no boundaries or limitations.”  -Dr. Edward Bilous; Director Juilliard Center for Innovation in the Arts

Formal study in college only enlarged the scope of my interests. At Mannes College of Music, I studied the art of Baroque performance on period instruments and painstakingly perfected string quartet masterworks under the guidance of chamber music gurus Felix Galimir and Julius Levine.

While finishing my doctorate in viola performance Juilliard, I became deeply immersed in New York City’s free-jazz & new music scenes and performed and improvised in New York theater productions.  Meanwhile, during seventeen years as a church musician, I performed every traditional and contemporary style ranging from Latin, pop, folk, grunge, rock, reggae, hip-hop, and country to traditional hymnody, Bach, and Andrew Lloyd Webber.  As I began searching for what music remained to be discovered, I devoted more time to composing and pioneered new works ranging from American classical chamber music to strings with live electronics.

When you hear me perform, you will not just be hearing another virtuoso.  You’ll be hearing a unique musician whose original performances are unlike anything else you’ve heard.

If you want to know about my pedigrees, awards, and accolades, you can read up on all that in my formal bios.  Awards, degrees, and accomplishments are nice, but my heart and passion are in the music itself.  Thanks for visiting!

CLICK HERE OR PRESS PLAY BELOW TO WATCH A PLAYLIST: 12 VIDEOS IN 12 DIFFERENT MUSICAL STYLES